This is going to be a short one, but I can’t go to bed without sharing the news:

PUBPAT (the Public Patent Foundation) and the ACLU have just won a major victory for scientific freedom: the US District Court for the Southern District of New York has ruled in favor of their argument that patents on genes that cause hereditary breast cancer and ovarian cancer are invalid. And the court made the ruling for the best of reasons: that genes are a product of nature and not patentable in themselves. 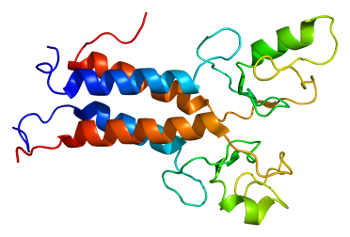 I’m not a lawyer, but it looks to me like Judge Robert Sweet examined the question about as thoroughly as one possibly could — start around page 101 of the judgment (marked as page 98 in the text) for the details. While the judge was unwilling to go so far as to rule the patents invalid on constitutional grounds, as the plaintiffs had asked, he made it clear that he was avoiding it only because there was no need to reach that conclusion to decide the case (constitutional questions are traditionally avoided if there is another way to reach a judgment).

Congratulations to PUBPAT and the ACLU! Both of them are non-profits; neither is swimming in money, the former probably even less than the latter. You know what to do (I just did).

I meant to post this sooner — my birthday was a month ago — but I just got busy. Anyway, these two wonderful objects came in the mail right on my birthday…

The first was a gift from Jim Blandy: 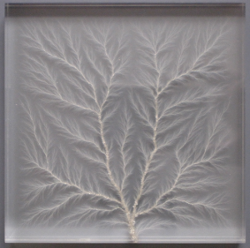 It’s a Lichtenberg Figure, that is to say, lightning captured in a solid medium. Whoa. They use a linear accelerator to bombard a block of acrylic (Polymethyl Methacrylate, which I can only assume is as cool as it sounds) with a beam of electrons. Eventually the negative charge builds up to a high enough level that the trapped charge surges out along branched pathways, I guess because the first bits of the surge create pathways that the next bits are more likely to follow, leading to the same kind of pattern — and for the same reason — as diffusion-limited aggregation. It is even more beautiful in real-life than it is in the photograph. Read more about it here here.

The other arrival was a gift from the choir I used to sing in in Chicago (and still miss every day): Golosá, the Russian Choir of the University of Chicago. Their second CD, Until Bright Day is out, and it’s absolutely beautiful — I can’t stop listening to it: 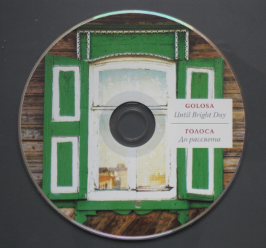 Listen to some tracks — you’ll be glad you did, and you’ll probably want to order the CD afterwards. If you live in Chicago, consider joining their mailing list (it’s low-traffic) to learn about upcoming concerts. They released the CD under a Creative Commons Attribution-ShareAlike license, by the way — so please spread that music around, especially if you live near Chicago.

I meant to post this sooner, but the time when I took the photo was really busy because Winnie was moving in (!). While we were moving stuff from her apartment, we encountered a Snow Citizen: 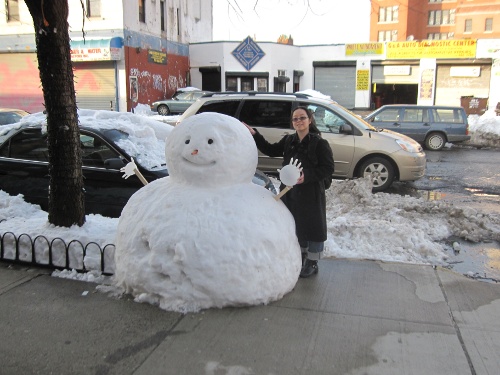 Ah, Williamsburg. Whatever else you can say about it, it definitely has production values! (Well, except when it comes to sign painting — yes, that is the infamous sing language in the background.)

Breaking news: Rep. Bart Stupak (D-MI) will champion a new bill to provide more and better sex education to high-schoolers and even young adults, in a tactic designed to lower the number of abortions in America through improved access to information and counseling.

Rep. Stupak became famous during the debates leading up to the health care reform vote as the organizer of a group of anti-abortion Democratic representatives who withheld their votes until they were satisfied that the health care reform bill would provide no federal support for abortions. In fact, Stupak had earlier introduced a measure stating that explicitly. However, this was widely interpreted as merely a flare — a signal to his constituents about which side he’s on — since both existing law and the health care bill itself already contained language that had the effect Stupak and his group wanted. Nevertheless, they succeeded in wringing out of President Obama a further executive order stating that no federal money would be used for abortion.

Despite tensions between Rep. Stupak’s group and more left-leaning members of the Democratic Party, news of this latest educational initiative was greeted with enthusiasm across the liberal blogosphere:

Scientists going back to Galileo have secretly abused corpses in the pursuit of knowledge. Researchers studying the Atlantic Ocean garbage patch have been throwing dead pigs into the sea just to see what happens next. Yes, that’s shocking and gross, but just like in the Whitewater scandal, it’s the coverup that is the crime.

National Geographic originally (maybe accidentally?) revealed the dead pig experiment in an article at nationalgeographic.com. You can clearly see references to the dead pigs in Google’s search results (see attached screen shot). The National Geographic url, though, makes no mention of the pigs at all. They scrubbed the record.

Why the coverup, National Geographic? Who are you protecting?!

Naturally, we had the rants.org crack investigative team look into this. James is right — something does smell funny here, and it’s not just dead pigs.

Let’s start with the Google search results. As you can see, at some point in the past the National Geographic article did talk about scientists using dead pigs to measure something about a newly-discovered Atlantic Ocean garbage patch: 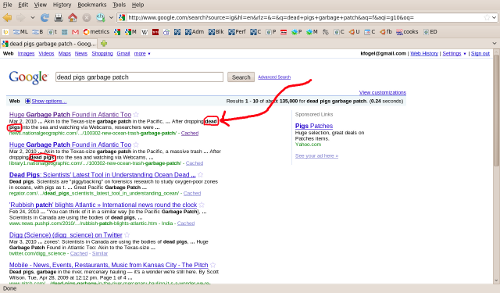 The exact words in the Google preview snippet are: “After dropping dead pigs into the sea and watching via Webcams, researchers were…”.

But if you visit the article now, it no longer mentions anything about dead pigs — the red arrow points to a failed search for the word “dead” in the page: 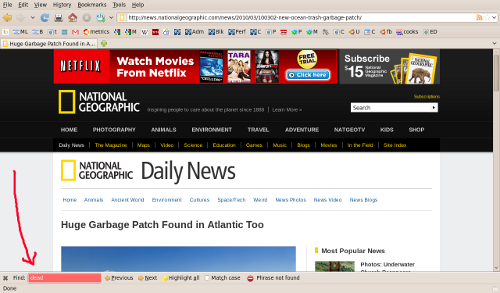 The original article is no longer in Google’s cache, unfortunately; it’s been superseded by a revised version of the article. But the cached version does have a message at the top indicating that the word “pigs” appears only in links from other pages, not in the article itself, so obviously other people were on to this too: 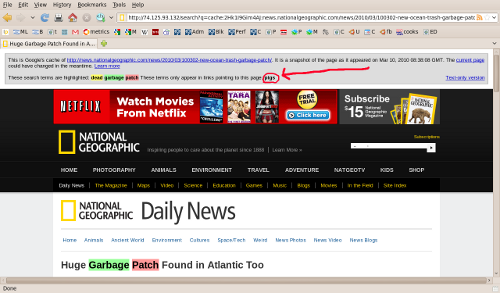 Google’s cache of the page has already lost the mention of dead pigs. (Original image here.)

(The word “dead” doesn’t appear in the cached text of the article either; it’s just in the title of an unrelated sidebar news item in the cache.)

I know National Geographic isn’t the New York Times (then again, neither is the New York Times… but I digress). Still, silently removing a substantial fact from an article, leaving no notice of the change? That’s just not kosher.

National Geographic, the people have a right to know: what’s behind the dead pig coverup?