There’s a disturbing trend in public-interest apps: They’re released for free, but without clear open source licensing or access to source code.

I think it’s not that the developers don’t want the apps to be open source — they just don’t think of doing it (and perhaps don’t understand, or don’t know from personal experience, how great the possibilities would be if they did it). 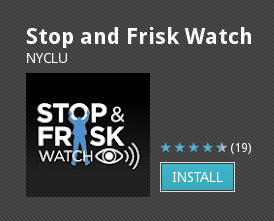 The Stop-and-Frisk Watch app is a terrific idea — at least, if like me, you think the New York City police department’s policy of informally criminalizing melanin possession is a big mistake. Here’s the app’s description:

“Stop and Frisk Watch” – a free and innovative smart phone application that will empower New Yorkers to monitor police activity and hold the NYPD accountable for unlawful stop-and-frisk encounters and other police misconduct.

Stop and Frisk Watch is available in English and Spanish, thanks to a translation by Make the Road New York. Initially available for Android phones, an iPhone version will be released later this summer. The app allows bystanders to fully document stop-and-frisk encounters and alert community members when a street stop is in progress. It has three primary functions:

The app includes a “Know Your Rights” section that instructs people about their rights when confronted by police and their right to film police activity in public. Stop and Frisk Watch is intended for use by people witnessing a police encounter, not by individuals who are the subject of a police stop.

But try looking around the app’s web site — can you tell where the code is, or if it’s open source? Nope. And if you follow the “Get the app” link to its app store page…

…there are no details there either. There’s a “visit developer’s web site” link, which looks promising, but if you click on it, it just takes you to www.nyclu.org, which is obviously not a development site.

The reason it matters is that apps like this have a core functionality that will be useful in many similar circumstances. For NYC, monitoring and reporting on stop-and-frisk is the thing, but in other jurisdictions, there might be some other activity that people need to record and report on. If they could modify this existing app, the only piece they’d need to tweak is the third part of the functionality, the “report” part. Maybe if enough people tweaked it, the code abstraction would get rolled into the core and we’d have a generic record-and-report app that could be configured for specific activities / jurisdictions / report recipients.

Wouldn’t that be nice? (Hint: yes.) But it won’t happen without access to open source code.

The request at the end (“iPhone version coming soon! Please check back.”) encapsulates what’s wrong here. Instead of having people come back here to check for the iPhone version, just do development in the open and give people access to the repository, bug tracker, etc, so they can follow progress to whatever level of detail they want, at their convenience.

Public interest apps should be open source, because that empowers the people closest to on-the-ground reality to modify the app to suit that reality. The times I’ve talked to an app developer about this, it turns out they weren’t really making a conscious choice at all — it’s just that there isn’t as much of a tradition of open source in mobile apps as there is in, say, server software, so they don’t automatically put an open source license on the code and do their development on a public repository site. They don’t have the same cultural reflexes.

I’m not sure how to start changing that, but if you develop public interest apps, please at least have someone point out this blog post to you :-).

And if you run a large app store, consider having a field that explicitly states “open source” and links to the code, not just a field saying “Price: free”. That one signal would do more to open this particular cultural door than all the blog posts I could write.