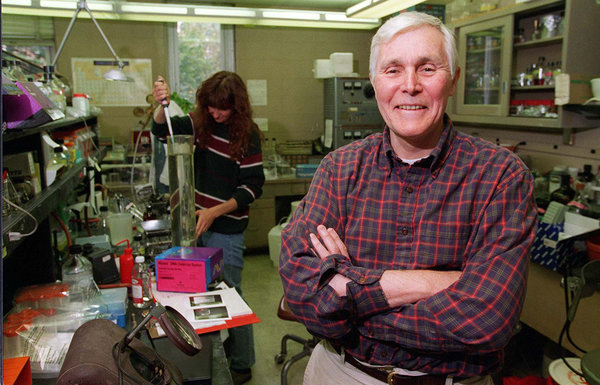 On the second to last day of 2012, Carl Woese died at the age of 84. I knew it was coming but even so was shaken by the news. He was a friend and for a couple of years a mentor; I’d somehow forgotten that he was also mortal — though he contributed to this, by remaining active and very productive as a scientist well into his 80s, until his final illness struck in the middle of last year.

Others have written eloquently about the foundational importance of his scientific work: his dedication to discovering and describing the microbial world as it really is, the initial resistance to and eventual acceptance of his discoveries, and the implications of his work for all of evolutionary biology. Two good places to start are the Institute for Genomic Biology memorial page and his New York Times obituary.

But those pieces don’t say much about him beyond his scientific work. While he cannot be separated from his life as a scientist — he was a scientist, down to his core, in the most basic sense of holding on to a deep humility before the complexity of the world around him — the scientific obituaries do not do full justice to the warm, humorous, remarkably kind and engaging person he was in other aspects of his life.

I was lucky enough to work for Carl in his lab for a couple of years in the mid-1990s, writing software for aligning genetic sequences, primarily ribosomal RNA, from related organisms. The photograph above was taken in 1996, and when I saw it in one of the obituaries it took my breath away. Not just because Carl looks so alive — what a cruel development photography is — but because he’s standing in one of the same familiar lab rooms where we worked, surrounded by an environment that I think he secretly loved aesthetically as well as utilitarianly.

Things you don’t see in the photograph:

The giant, macabre inflatable Ronald Reagan doll (Carl was not a fan), that occasionally got tossed around the room.

The large poster of Miles Davis, placed respectfully high on the wall near Carl’s chair.

The restaurant menu from, if I recall accurately, 1963, taped to a filing cabinet and proving that you could once get a complete steak dinner, including side dishes, for only $3.65.

Various humorous cartoons, can-you-believe-it magazine stories, etc, many of them not repeatable in polite company.

A big printout, updated irregularly, of the tree of life (that is, of the evolutionary relationships of species on Earth) according the latest phylogenetic data and methods. In a sense this was his life’s work: it is fitting that the printout was sometimes left sitting on an empty stretch of lab bench for a while, or kind of haphazardly taped up wherever there was space on the wall or on the side of some equipment. You know something’s for real when no one makes too big a deal of it.

Most of all: the long, digressive, insightful, brilliant yet utterly unpretentious discussions about evolutionary biology, science in general, how to evaluate a theory, how to tell the difference between politics and science, the role of religion and spirituality in human life, and many other things. These are my favorite memories of Carl, and indeed among my favorite memories period. Eighteen years later, I realize that he was giving a great deal of himself to a naive and somewhat sheltered youth who had conventionally politically correct notions about what science “should” tell us, and I can only hope he enjoyed the conversations to a degree proportional not only with how much I enjoyed them then, but with how formative, indeed corrective, I now realize they were.

He was open to many things and many people. In the last few days I’ve been corresponding with my friend Yong-Qing Yang about Carl. I hope Yong Qing won’t mind my quoting from a private email, as it somehow captures something essential and beautiful about Carl’s willingness to dive in, to seek understanding without necessarily knowing in advance exactly how it would come (which also describes his approach to science):

I was very impressed with his openness to other things, like eastern philosophy etc, and even took the time to learn Qi Gong from me (I remember teaching him beside one of the hills near Orchard Down in Urbana). One segment each week was our teaching schedule (there are fives segments on the moving parts of the Qi Gong I taught him and he always showed up on time at the place, mostly in that red-colored grid shirt as we see from pictures in the news these days). I will miss him and want to kick my butt (if I could kick my own) for not visiting him earlier as three of us said we would get together in Urbana again one day.

The software project was not a notable success — I was young, and inexperienced at project management [1] — but with characteristic generosity, Carl never seemed to hold that against me, either at the time or afterwards. We stayed in touch after I left the lab and Champaign-Urbana. I moved around a lot, living abroad and later in parts of the U.S. far from him, so we emailed, and got together for dinner in Champaign-Urbana every few years (not nearly often enough, in retrospect). I foolishly assumed that we could continue having dinner every few years forever. Of course, that was never possible. It’s sad to know that I’ll never again hear that instantly recognizable voice saying “Hey, kKarl” (to avoid confusion in the lab, we started pronouncing the first letters of our names; the habit carried over even when it was just the two of us speaking). I miss him more than words can say, and can see from the other posts appearing in the past few days that many, many people feel the same way. My deepest condolences to his family, who have lost a wonderful and loving husband and father, one whose humanity was intimately connected to his lifelong pursuit of truth and understanding, in all things.

[1]   The other programmer on the project, my friend Jim Blandy, was more experienced, but was working remotely from a lab at Indiana University. He’s largely the reason the software worked at all.

[2]   I just learned that donations in Carl’s memory can be made to the Carl R. Woese Research Fund at the University of Illinois. He approved this fund to support research on evolution, systems biology and ecosystem dynamics at the Institute for Genomic Biology, where he was a faculty member. I’m donating, and naturally encourage you to as well. Gifts may be sent to the “University of Illinois Foundation” in care of The Institute for Genomic Biology, 1206 W. Gregory Drive, Urbana, IL 61801, USA, or via the web (remember to enter the specific fund: “Carl R. Woese Research Fund”). For additional information, please contact Melissa McKillip, IGB director of development at mmckilli@illinois.edu or +1 (217) 333-4619.

4 Comments on "In Memoriam Carl Woese"