I meant to announce this last week, but some very sad circumstances intervened (see the previous blog entry).

Now there are 19 days left in my Kickstarter campaign to fund doing a second edition of Producing Open Source Software. I still hope to reach the goal, of course, because I want to give the revisions the attention they deserve. If you liked the book, and would like to see it updated (it’s been seven years), then please pledge and please spread the word. I can only do the update by devoting serious (i.e. funded) time to it. O’Reilly Media will publish it, as they did the first edition — but only if there’s something to publish :-).

(They’ve been very supportive of the book, by the way, including a generous advance for the first edition and behind-the-scenes help with this Kickstarter campaign, but I was never expecting an advance for this revision; the economics of publishing simply don’t work that way. Publishers should be able to work hand-in-hand with authors doing Kickstarter campaigns, and if anyone understands that, it’s the publisher that started the Tools of Change publishing conference.) 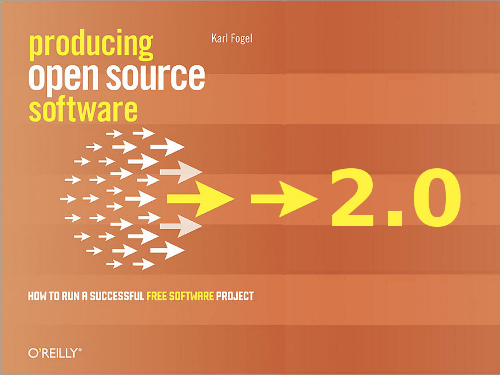 Here are more details, copied from the Kickstarter page:

It’s time to update my 2005 book “Producing Open Source Software: How to Run a Successful Free Software Project”. Help me do it right.

In 2005 I wrote a book called Producing Open Source Software, about the human side of running free software / open source projects. It was published by O’Reilly Media, and simultaneously released online under a free license. It’s been pretty successful, at least in the ways I’d hoped: it’s cited frequently by people I respect, it even sells decently, and I get plenty of constructive bug reports (my favorite measure of success). It’s also been translated into many languages, often by volunteer translators or translation teams.

But 2005 is a long time ago. The world of free and open source software is changing — technically, culturally, even legally — and the book really needs to be updated after seven and a half years. To give you an idea: GitHub didn’t even exist when the first edition came out!

I’ve been doing a lot of open source consulting since the first edition was published — consulting about open source processes, how to launch and run projects, etc — with a wide variety of clients: governments, for-profit companies, non-profits, and individual developers. I’ve also been talking to people in a many different open source projects. Along the way, I kept thinking that I’d love to incorporate the things I’d learned into a second edition. Eventually, I realized that the way to find time to do it was to treat the book like a client — hence this Kickstarter campaign.

The second edition, like the first, will be published by O’Reilly Media, and will be under the same free license.

Read more at the Kickstarter page.