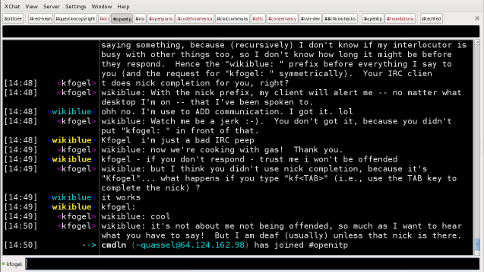 This post is only here so I can refer others to it from IRC:

If we’re talking in an IRC chat room (or in some similar service like Zulip that has shared chat rooms), please address me in each message you send to me using my nick — “kfogel”, in the case of IRC (though it might be different elsewhere). I’ll return the favor.

Your IRC client probably does nick completion, so you don’t have to type out “kfogel: ” each time. You can just type “kf” and then hit the <TAB> key, and it should complete the nick appropriately based on who’s in the channel. (You might have to configure your client to append the colon and the space automatically; some do it by default, some need to be customized for that.)

Why say someone’s nick every time?

When you’re in an IRC conversation, you’re not really in a conversation. You might think you are, but it’s not like a real conversation — you can’t look at your interlocutor’s eyes and body language and know that they’re still there and still paying attention.

IRC client software understands this, so most clients do a special trick: they know the user’s nick (e.g., I configured mine to know that my nick is usually “kfogel”) and can thus alert the user that they’ve been spoken to. Mine alerts me wherever I am, even if I’m not looking at the IRC window right then, and the notice remains on until I next switch focus to the IRC window. When I get to the IRC window, the person who spoke to me will have their nick highlighted in bold yellow, on the lines addressed to me, so I can find those lines easily. (This is visible in the example image above.)

For heavy IRC users, this is quite important. Most of the time after I say something to someone in IRC, I immediately switch away to another workspace / virtual desktop on my computer to do something else, or at least to another IRC channel. After all, I have no idea how long it might take the person to respond — maybe they just got a phone call right then. Heck, for all I know, they could have stepped away from their computer entirely for a while.

So it simply doesn’t scale to sit around looking at dead air in the channel, waiting for a response, and experienced IRC users rarely do so unless there are strong signals that the real-time, in-channel conversation has the other person’s full attention, to the point where they would say something explicitly before stepping away for any reason.

Again, in an in-person conversation, none of this is necessary. We would have a shared space: I’d know if your phone just rang, or if someone came up to remind you to head over to the meeting, or whatever. Lots of things are signalled environmentally or by non-verbal cues. But IRC doesn’t have any of that. In the absence of those cues, a different style of communication is necessary.

Over the years, IRC users and client software have learned to use nicknames for signalling (sort of like out-of-band flow control in communications networks). It really works — it’s actually very liberating, once you get used to it. But it only works if you really, literally, I mean this, prefix everything you say to me, every single input line, with my nick. That gives me the freedom to switch away from the IRC window as needed, knowing I’ll be alerted when you respond, or when you start a new conversation with me. Even if we’ve already exchanged five or ten turnarounds worth of conversation, and you think you can skip the nick, please don’t.

I mean, sure, once you get used to IRC, you can start to skip the nick sometimes. For example, when you’re going to say several lines to someone, and they’re not of interest until the final line is delivered, then you might just use the nick for the final line, knowing that your interlocutor can look at the previous lines — the “backscroll” — at that point. But wait until you have a feel for things. If you’re new to IRC, just say a person’s nick every time. If you run into someone whom that annoys, they’ll tell you, and you can adjust for them while pointing to this article as your excuse.

(Oh, also: you don’t have to say the nick when in a private chat channel, or “privchat”, with someone. That’s because the IRC client knows it’s a privchat, so it will do the alert dance every time the person on the other end of the chat says something, because it already knows that was directed at its user.)