I’m taking a vacation from email for a few weeks, so please don’t worry if you don’t get a response — just resend in late August.

About fifty million years ago, I encountered a minor bug in the OpenOffice word processor. It was an easy fix, a menu layout problem or something like that, so I thought I’d have a go at patching it. Of course, the first step would be to build the latest development version of the code and see if the bug was still present.

Well, I got stopped on that step. I spent an entire day trying to build OpenOffice, and didn’t succeed. I don’t think I even came close, though it was hard to tell. I eventually concluded that to be an OpenOffice developer, you’d need to first get a Ph.D. in building OpenOffice, and gave up in frustration. It brought home to me the importance of making software easy for developers to build — especially in open source software, where you depend on developers who bring their own energy and who will quickly take that energy elsewhere if it is not rewarded.

Years later, the OpenOffice project forked — well, the actual story is a bit more complicated than that, but basically today there is LibreOffice and Apache OpenOffice. Both are active open source projects, and it’s fair to think of LibreOffice as one of two equally legitimate inheritors of the old OpenOffice mantle in the sense of development continuity. (Do search://apache openoffice libreoffice “document foundation”/ for the detailed story.)

I happened to be talking to some of the LibreOffice developers recently, and related my build experience from years ago, and how it had turned me off from ever considering OpenOffice development again, and from even considering LibreOffice development after the fork happened. The whole thing had left me scarred: buildability was such an obvious non-priority then that I didn’t see how a project could possibly ever get from there to something a normal mortal might build in finite time.

I expressed skepticism, but they swore it was true. Really?, I said. Okay, I’ll start from the top of the LibreOffice.org home page and see if I can find my way to useable build instructions, right now, right here, while we’re on the phone.

And you know what? They were right!

That was amazing — it changed my mind about how much a project can improve its build experience if the developers really decide to prioritize it. (Disclaimer: I haven’t tried the same with Apache OpenOffice; it might well be equally easy.)

They asked me if as penance I’d fix another minor bug, since I wasn’t able to fix that menu bug all those years ago, and offered bugs.launchpad.net/ubuntu/+source/libreoffice/+bug/1141106 as the victim. This seemed like a completely fair request; I didn’t make any promises but I said I’d take a look. Sadly, I have to admit that I’m not going to fix it any time soon, only due to other commitments. It’s not a hard fix in theory, but verifying that it works everywhere could take some back-and-forth with various bug reporters and testers, since it’s a modification to run-time shell scripts, and right now I need to ruthlessly cut down on small-scale random commitments.

So as an apology for not fixing that bug, I wrote this blog post. Kudos to the LibreOffice team for having given such a complex piece of software such an easy build process. Although by not fixing bug 1141106 I guess I’m contradicting my own claim, still, I think that being so conveniently buildable must be a major ingredient in getting developers in the door, and that this pays off for the project in the long run.

For those friends I’m not seeing in Portland this year: sorry to miss you this time!

I decided, for once (and hopefully once only), to not go to OSCON this year. Two main factors: I’ve already been traveling too much, and I’m greedy for time to concentrate on my book update.

Going to OSCON is always enjoyable, I always learn new things, and it’s wonderful to catch up with old friends and meet new people… but one can’t do everything everywhere. I wasn’t scheduled to speak this year, and there’s just too much on my plate. So, I decided to skip it this once.

See you next year! 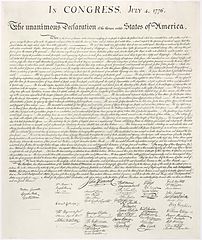 Every Fourth of July, the New York Times prints the entire Declaration of Independence of the United States on the back page of its main section, in facsimile and in text. I read the whole thing on the subway this morning, just to remind myself what they were thinking of.

I’m pretty sure they were not thinking of a country where the government classifies the extent and nature of its surveillance, and even lies about it when citizens and their representatives ask. The distinction between discussing the overall process of surveillance and discussing individal targets of surveillance is crucial. Edward Snowden informed us about the process; he has been careful not to leak the targets (unless you count revelations of a very general nature, such as that we spy on the governments of our allies). No terrorist knows more today about whether they’re being watched than they did before Snowden’s leaks. Anyone trying to blow something up would naturally assume, and behave as if, they were under surveillance already.

Can anyone point to any real harm to national security from Snowden’s leaks? I have yet to hear of any. The leaks merely informed the citizenry of what we should have been informed of all along. It’s not a question of whether the government should sometimes be able to eavesdrop, or about whether there is rigorous enough judicial review or oversight. It’s that whatever we’re going to do, the policies about when and how we do it are legitimate matters of public debate — and we can’t debate them if we don’t know them. This is about civilian control over the military and intelligence services. Snowden himself said this eloquently enough, as have many others, so I won’t belabor the point.

But there is one slightly different argument I’d like to respond to:

Some people say that, even if in some abstract sense it is right that this information should come out and be debated, Snowden was wrong to leak it because in doing so he violated his oath to guard the secrets he had been entrusted with.

But he had a conflict of oaths: on the one hand, he and those around him were sworn to uphold the Constitution; on the other hand, he’d made a promise to keep secrets secret. What is the right thing to do when you promise to keep a secret, and then the secret they tell you is that some people aren’t keeping their promises?

For those who still don’t feel that conflict as Snowden felt it, on this July Fourth I’d like point out that George Washington was an officer of the British militia in the American colonies. Well before the American revolution of 1776, he led a military force acting on behalf of the British crown, defending first part and then all of the Virginia colony’s borders. I don’t know enough about colonial militias to know if holding those positions required swearing an oath of loyalty, but it seems likely that it did (the new United States Army itself instituted an oath of allegiance fairly early on during the Revolutionary War). In any case there is at least some conflict in serving in a country’s militia and then leading an army against that same country’s army. But by their nature revolutions involve broken promises. You can read the Declaration of Independence as one long justification for when and why they should be broken (seriously, take a look).

Oaths sometimes conflict with each other, and you don’t always find out how until it’s too late. Then you have to decide what to do. Edward Snowden did the right thing in a difficult situation, and the debate that has ensued is evidence of this.

(It’s interesting that people who fret that Snowden broke his oath don’t seem to get as worked up when people get divorced and thus, in many cases, break their marriage vows. Marriage isn’t about national security… but then again, neither were Snowden’s leaks.)

If you agree, please say so, preferably in public — on your blog, if you have one, or on Facebook, or on Twitter, or on the bumper of your car, or on the back of your laptop. It’s important. There are a lot of people right now, especially politicians who are worried either about being attacked on national security or about losing the trust of the intelligence community, who feel they have to condemn what Snowden did. In some cases they’re sincere; in other cases they sense which way the wind is blowing in their particular environment and they say what they need to say to keep their position. I don’t even blame them, but it’s important that they not be the only voices out there. Say you’re glad to have the information that Snowden leaked. Explain clearly why it’s important that the public be able to talk about these things. Don’t let anyone feel they’re alone in thinking this, and you won’t be alone either.