This post is a public service announcement for all those using GNOME 3.14 or higher (in my case on Debian GNU/Linux, although that detail probably doesn’t matter here).

I wanted to get rid of the workspace switcher popup. That’s the thing that looks like this and displays briefly whenever you switch workspaces: 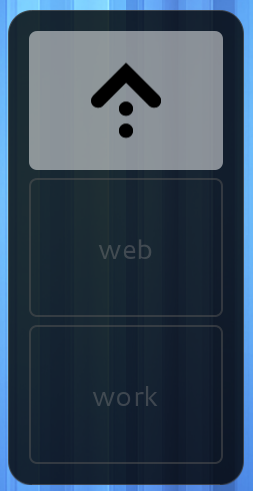 I do not know what that thing is for. It serves no purpose that I can see. When I go from one workspace to another, I am interested in the destination. Whether I moved conceptually “up” or “down” from another workspace to get there is utterly irrelevant — the popup is just visual noise on my screen, getting between me and wherever I was going. (And by the way, they’re not “up” and “down” in my mind anyway; they’re “left” and “right”. We’ll never understand each other, GNOME. We’re too different.)

A long time ago I disabled that popup, using Windsor Schmidt’s handy Disable Workspace Switcher Popup extension. I just put it into ~/.local/share/gnome-shell/extensions/disable-workspace-switcher-popup@github.com/, launched gnome-tweak-tool, went to the Extensions tab, enabled the new extension, restarted GNOME, built my own backhoe, and voilà, the workspace switcher popup stopped appearing. Or maybe it was the other order? I don’t know. It seems like an awfully complicated procedure, in retrospect, but anyway it worked.

Then recently, after I upgraded to GNOME 3.14, it stopped working — that is, the workspace switcher popup came back.

Here’s what I had to do to suppress it again:

Add “3.14” to the list of supported shell versions in ~/.local/share/gnome-shell/extensions/disable-workspace-switcher-popup@github.com/metadata.json. In other words, I edited this line, adding the “3.13” and “3.14” on the end:

Looks like I’m not the only person to have run into this problem. Oskari Saarenmaa opened pull request #6 for this — which I didn’t even see before I created basically the same patch in pull request #7, but my patch supports GNOME 3.13 as well, for whatever that’s worth. (Was GNOME 3.13 ever released? I don’t even know, but if it was, my PR will support it. Yay.)

Anyway, here endeth the public service announcement. This is how you can disable the workspace switcher popup in GNOME 3.14. Got that, search engine indexes? Good.

2 Comments on "Disabling the GNOME Workspace Switcher Popup (in GNOME 3.14 on Debian GNU/Linux)."