I guess I’ll just write this as though I have reason to be believe that the people who write headlines for the New York Times read my blog.

For the record: I’m a subscriber, and I think the Times does some terrific reporting and investigative journalism — when they’re at their best, there’s no one better. That makes the unforced errors all the more disappointing.

Look at the top of today’s edition’s front page: 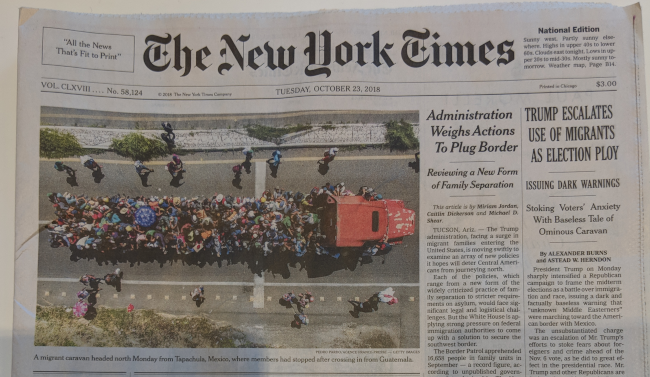 First note the caption beneath the big color photo on the left, which says:

A migrant caravan headed north Monday from Tapachula, Mexico, where members had stopped after crossing in from Guatemala.

Now all the way over on the right, note the bold headline at the top of the rightmost column:

Trump Escalates Use of Migrants As Election Ploy

If you take the headline at face value, and then look over at the photo, you would naturally come to the conclusion that the New York Times is contradicting itself on its own front page.

It turns out that the article under the headline is indeed about a baseless tale — just not one about the existence of the caravan itself, even though that’s what the headline would imply to any casual reader:

President Trump on Monday sharply intensified a Republican campaign to frame the midterm elections as a battle over immigration and race, issuing a dark and factually baseless warning that “unknown Middle Easterners” were marching toward the American border with Mexico.

In twenty words of headline, there wasn’t some way to fit something specific about the false claim in?

There, did it in 19 words, one fewer than the number they used for a misleading and less informative headline.

Yes, by the way, you know and I know and the New York Times knows that “Middle Easterner” doesn’t mean “terrorist”. But it’s perfectly clear what Trump is doing here and the NYT shouldn’t shy away from describing it accurately… in the headline.

(Entirely separately from the above, there’s the question of why the New York Times is running a giant color photograph of the migrants above the fold on its front page, for the second time in the past few days. These caravans have been going on since 2010; they’re larger and more organized the last couple of years, but they’re not new. As an independent news outlet, why let a politican’s talking points drive cover art choices in the first place?)