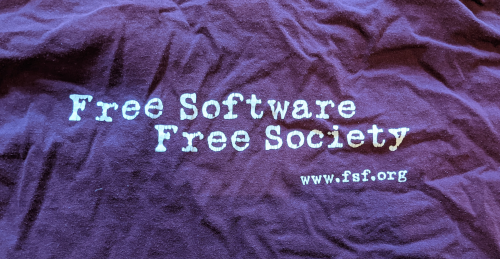 There’s a petition circulating that is essentially a public indictment of Richard Stallman.

More than half of the initial signers are people I know and respect, and have for a long time. They care a lot about ethical behavior in general and about free software in particular. Normally, I expect to be able to sign most petitions they would sign, but this one I’m not on board with.

One reason is that it simply doesn’t make a good case for a lot of its charges. In the sources the petition cites, I searched for anything that would support the claims of “bigotry”, “hate”, and “intolerance”, and didn’t see it. The primary sources are there — you can read them yourself and make up your own mind, of course.

It’s true that Stallman has expressed opinions and positions that are widely condemned, and that people feel hurt by them; some of those people are my friends. Had the charges been insensitivity and absence of any serious attempt at empathy, who could deny it? Cherry-picking certain distinctions that are important to him but not to others while ignoring ones that are important to others? Absolutely. But what petition says is different, and it’s a difference of kind, not of degree. Bigotry, hate, and intolerance are not what Stallman exhibits — and yes, I do think that distinction should be important to all of us. (I was talking about this with some friends yesterday, and paraphrased something one of them said this way: “There’s no necessary correlation between being hurt and being right.”)

The second reason is the explicit call for blanket ostracism. Having portrayed Stallman as some kind of monster (which he is not), the petition says:

These sorts of beliefs have no place in the free software, digital rights, and tech communities. …

There has been enough tolerance of RMS’s repugnant ideas and behavior. We cannot continue to let one person ruin the meaning of our work. Our communities have no space for people like Richard M. Stallman, and we will not continue suffering his behavior, giving him a leadership role, or otherwise holding him and his hurtful and dangerous ideology as acceptable.

Free software is a big place. It includes Trump voters and Warren voters; it includes people who believe that women shouldn’t control their own bodies; whoever you are, it includes people you strongly disagree with on multiple important things. Empirically, it’s a kind of fallacy to say that Stallman doesn’t belong anywhere in the movement that he is more responsible than anyone else for creating.

I realize that for the petition’s authors and signers this is a question of their fundamental values, in which case they may find that empirical point irrelevant. But the call for ostracism from free software is still unjustified by what the petition itself presents. Indeed, although the very first sentence calls him a “dangerous force”, and the above-quoted excerpt says he must not “ruin the meaning of our work” (how is he doing that?), the striking thing is that the ideas of his that the petition focuses so intently on have gotten little uptake.

Stallman’s vision of free software succeeded because it was a good idea. His persistent articulation and demonstration of it helped, especially at the beginning, but in the long run it succeeded because others saw it was a good thing and made the cause theirs. Stallman does not own it. Where his other ideas — the ones cited by the petition — have not succeeded, it’s because people have not liked them. (The majority of his ideas are fairly standard progressive positions, by the way; those are starting to get some uptake now, and of course that’s because many people, not just Stallman, favor them.)

I noticed that many long-active people in free software have not signed the petition, and I’ve talked to several of them about it. One common reaction I heard is that it “goes too far”. While that’s true, that’s not the point I’m making here. Rather, the problem is that the petition has category errors of real significance, both about Stallman and about what to do when someone expresses opinions one disagrees with and even feels hurt by.

This petition does not display the values it claims to represent.

Disclaimers and disclosures: This post reflects my personal views only. It does not reflect the position of any company or organization I am affiliated with. I’ve been a member of the Free Software Foundation for a long time, remained one throughout the period following Stallman’s abrupt resignation in late 2019, and have had both personal informal contact and professional contact with the FSF. I have made a few light edits to this post since first publishing it; the edits merely clarify and do not change the substance.